Alyvium® is a dietary supplement with an optimal combination of natural olive polyphenols, vitamin A, biotin and riboflavin. 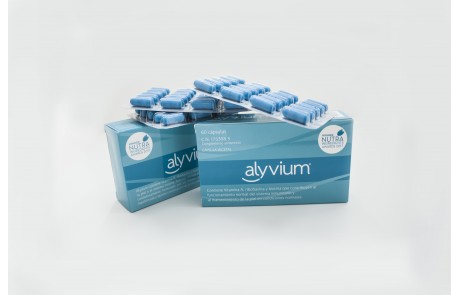 By buying this product you can collect up to 1 loyalty point. Your cart will total 1 point that can be converted into a voucher of 2,00 €.

Alyvium® is a dietary supplement with an optimal combination of natural olive polyphenols, vitamin A, biotin and riboflavin. This price includes home delivery service in 24-48 hours since payment is received. For deliveries to Melilla, Ceuta, Canarias y Baleares, the delivery time will be between 3 and 4 days since payment is received. If you have no notice after the stipulated time, please contact us, although the company monitors each individual delivery.

*Should the product be damaged in any way at arrival, please contact us.

Alyvium® is a dietary supplement with an optimal combination of natural olive polyphenols, vitamin A, biotin and riboflavin.

Alyvium® contributes to the normal function of the immune system and to the maintenance of normal skin. Vitamin A takes part in the development, protection and regulation of normal mucous membranes.

According to the scientific panel of the European Food Safety Authority (EFSA), vitamin A plays an important role in the normal function of the immune system. It is an essential nutrient for the human being. It is used to treat diseases such as acne, eczema, psoriasis, burns, etc.

According to EFSA, riboflavin and biotin contribute to the maintenance of normal skin. Riboflavin belongs to the vitamin B group and it has important functions in the organism. Biotin is another main vitamin which takes part in the metabolism of the carbohydrates, lipids and amino acids. It is known that its deficiency causes stress. The lack of biotin gives symptoms such as dermatitis or eczema and dry skin.

The specific combination of biophenols present in Alyvium®, among which are mainly hydroxytyrosol, oleuropein, tyrosol and verbascosides, has a high antioxidant capacity.

The European Food Safety Authority (EFSA) recommends the daily intake of olive oil polyphenols for the protection of lipids in blood against oxidative damage, due to its high antioxidant capacity.

Alyvium® is a natural alternative to relief symptoms of disorders of the immune system which are reflected in the skin such as dermatitis, eczema and psoriasis*.

No customer comments for the moment.